Instead of having a weekend dealing with FOMO because I was missing my last HallOUween in Athens, I decided to spend my weekend at Entertainment Weekly’s Pop Festival. The two-day event was filled with screenings, panels, performances, live podcasts and interactive booths. This event gave me the opportunity to be in the same room with some of the cast members from my favorite television show.

If you know me, you know I have a very sick obsession with Grey’s Anatomy, to the point where I thought I needed an intervention… but all is well, now I only watch one episode a week.

During Day One of the Festival, I attended the live taping of Too $hort’s podcast, which I enjoyed because part of the conversation was focused on my hometown (Cleveland) and their winning roll in sports. At the end of the night, I experienced Janelle Monae and Nick Jonas live, who both leave their heart on the stage.

For Day Two, I mentally prepared myself for the session that I was most excited about. Grey’s Anatomy. When the cast (Stephanie, Deluca, Maggie, Ben and Arizona) was introduced to the stage, I had to take a moment to get myself together. Tears came to my eyes. I realized that this was not the setting for tears, but I couldn’t believe I was a couple of feet away from people I have spent 13 seasons watching. 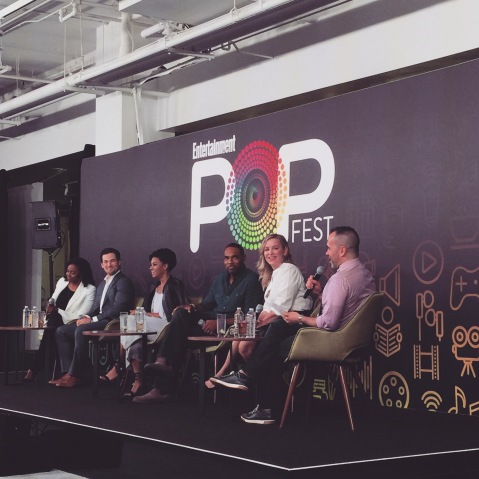 The session was based on Entertainment Weekly’s ‘Three Rounds,’ but just a live version. The cast sipped on three rounds of drinks while an EW editor asked them questions. The cast shared their audition stories, the Grey’s Anatomy deaths that were the hardest for them and their most memorable moments.

They also shared how secretive Shondaland is, like how several of them knew they were going to be on the show, but had no idea who they were playing. One way to get information on their characters was by their costume. If you had light blue scrubs, you knew you were either an intern or a resident and if you had dark blue scrubs, maybe you were a surgeon.

My favorite moment of Three Rounds was when the actors were asked if they thought they would be able to perform a surgery based on what they have learned from being on the show. Sometimes I believe I can perform a surgery from how much Grey’s I have watched, so that was hilarious.

Pop Fest was a great experience for me. Besides the Grey’s Anatomy moment, there were so many other cool people on the schedule including the cast of Teen Wolf and This Is Us, a live taping of Bob’s Burgers, Hilary Duff, James Corden, Jennifer Aniston and plenty more. I even got to see JoJo perform, which brought back childhood memories. I played her album OUT when I was nine years old.

Although I missed my last HallOUween, I can’t complain. I had a great weekend.